Circa 1886, this is a photograph of the fine home of Thad and Mary (Bert) "Gogi" Thayer, located in the heart of Old Post (also known as the village of Pahquahwong).

Thad Thayer, who came to this area from Maine, was one of the first white settlers in Sawyer County, establishing a trading post around 1865 in the Indian village of Pahquahwong, which today mostly lies beneath the waters of the Chippewa Flowage and is located about a half mile to the southwest of the Church Bars. Thayer’s hotel (as it was sometimes referred to) can be considered one of Sawyer County’s first places to actively serve guests. In effect, much of our area’s tourism can be traced back to this historic site. While the clientele of these places consisted primarily of tote-teamsters and lumberjacks, there was that odd adventuresome outdoors man who was known to wander up now and then.

Pictured along with five of their children, Thad is leaning against the porch and his wife Mary is seated on the right with a baby…. possibly their son Frank Connie Thayer. Frank would grow up to work as a laborer and later a (saw) filer for lumber camps; during the 1920s he built and rented out some cabins at what is today known as Johnson’s Resort; and during the early 1930s until his death in 1955 he and his wife Libbie owned and operated the Bow and Arrow Resort on the Chippewa Flowage.

Thad Thayer’s daughter Lucy (possibly the little girl holding the hat in the photo) married Billy DeBrot, who ended up building and operating three different resorts: one called the Pahquahwong Camp during the Teens, another called the Debrot James Resort in New Post during the 1920s, and the final one called DeBrot’s Indian Post Resort from the 1930s into the 1950s.

Another of Thad Thayer’s daughters, Anna, married Fred Worman and they built a homestead and raised their family on the site where a stone foundation today lies four feet below the surface of the Chippewa Flowage, located between Herman’s Landing and Sisko’s Pine Point Resort just to the west of County Road CC.

Circa 1886, this is a photograph of the fine home of Thad and Mary (Bert) "Gogi" Thayer, located in the heart of Old Post (also known as the village of Pahquahwong). 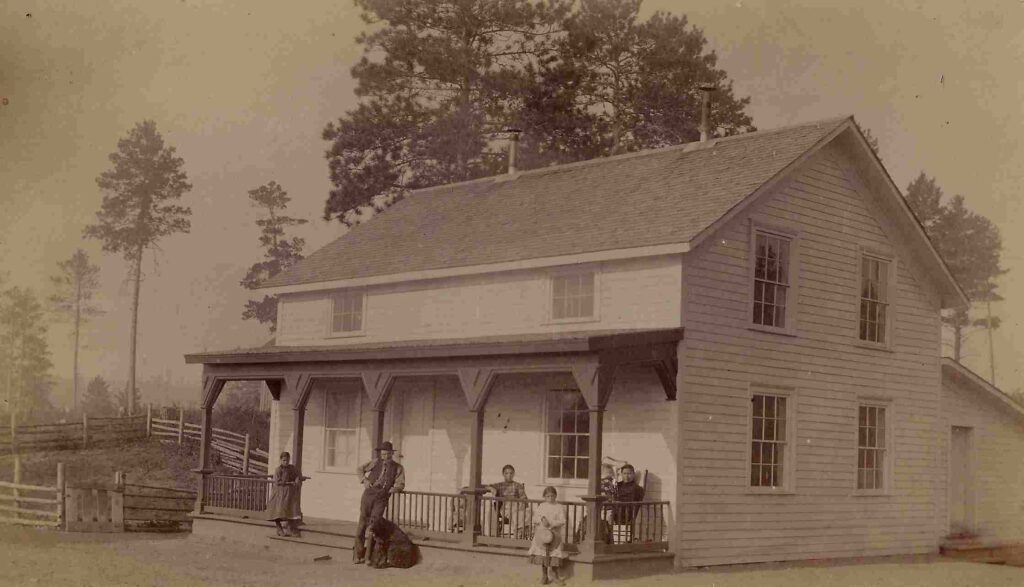