Was there Life before the Resort

Three family generations assist Bev and Rudy Licciordone with the numerous chores associated with running Chief Lake Lodge. Rudy was employed with Pepsi Cola and Bev was an efficient housewife in Orland Park, IL when they purchased this property in 1977. They knew immediately the choice of northwoods living was a better quality of life for them. Each season presents a different aspect in the family business. Bev enjoys the summer months with numerous patrons and much activity, while Rudy prefers the winter solitude with outdoor projects. Chief Lake Lodge proudly boasts of their full service family restaurant, popular with summer travelers and snowmobilers alike. The restaurant has been run by Rudy Jr. since 1995, and now a grandson is cooking in the kitchen. The Licciardones express their love for the area and the awesome Chippewa Flowage as this is their permanent home for the duration.

Twenty-seven years ago Moose and Millie Speros left Sioux Falls, SD and headed to the Hayward area. Being an Air Force family, they had lived all over the country and Moose was looking for that perfect spot to cozy-in. It wasn’t Millie’s first choice when they purchased Tiger Musky, but she admits she soon realized it was the best move yet. She adores the flowage and the Hayward area, especially the marvelous patrons of the 15 unit resort who have become close friends. Uniquely there’s a cabin and tree dedicated to the memory of those no longer living. Tiger Musky utilizes their family and offspring to assist with the huge job of running a resort. Moose was appointed the first Secretary of Tourism for the State of Wisconsin. This cabinet level position was created in recognition of the vital impact of the tourism industry for the State of Wisconsin. They would never return to their life before the resort. This is where they belong and as Millie puts it, “There are no downers on the flowage.”

Tom and Betty Sweeney moved from Evanston, IL in 1961 to purchase Shady Nook Resort on the South East side of the flowage. Both were looking for a new and different life style, not so caught up in the rat race. So, they moved from a print shop to the resort business that offered the perfect spot to raise four children. Tom lost his Betty while two of the kids were still in diapers. Grandma from Chicago stepped in to help with the family. Tom not only ran the resort, but served as president of the Hayward Lakes Resort Association and many years as the president of the Lake Chippewa Flowage Resort Association. He was instrumental in executing the Northern Initiative, a cooperative marketing effort with the L.C.O. Tribe. He continues to be active in the community to this day, serving as Vice-President of the National Freshwater Fishing Hall of Fame. The “children” still assist on a part time basis at the resort. Shady Nook guests are dedicated patrons, with one family returning steadily for 42 years. Many precious friendships have been formed. Tom notes how the Hayward area has changed since 1961. There were no stop lights at all, and it had a ghost town atmosphere at times. He chuckled as he remembered how ill-equipped they were in the beginning and often lacked change for big bills, for instance. Tom said he intends to remain always in the unique wilderness of the Chippewa Flowage. 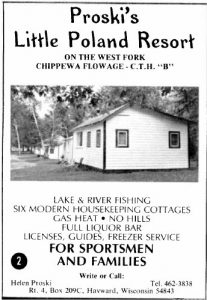 Jumping in with both feet, Bill Fetzner purchased Proski’s Little Poland Resort on July 15, 1983, in the heart of the tourist season. They changed the name to Musky Tale. Bill was a warehouse manager for Meyer’s Plumbing Co. in Aurora, IL. The wilderness of the flowage area called to them, to live in a more laid back environment. Bill wanted to guide sportsmen in his spare time, so a resort was a perfect business choice. His seven cabins, two motel units and R.V. Park keep them most occupied. They plan to add more sites to the R.V. park to accommodate tourists on wheels.