Labor Day 2014 I guided a father and son team, Greg and Cory Oimoen, from Blue Mound, WI. They were interested in a Musky hunt. They both had never fished for musky at all and with Greg having limited mobility in his left arm, this kind of fishing could possibly pose a challenge for him. After a bit of schooling on how to fish with the big boy rods, we started our hunt. 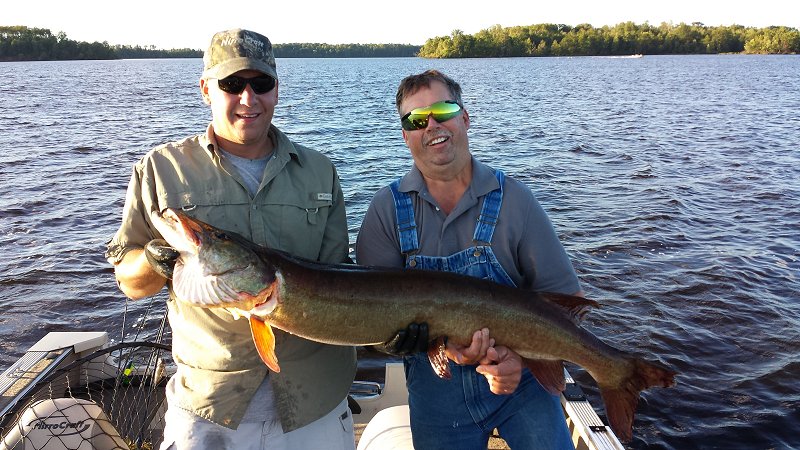 I decided to set Greg up with a surface bait, a sucker colored Stillwater to aid in his slight disability. This way, he could retrieve it when he was ready. Cory, his son, was tossing everything else but ended up putting on a green and black colored Bucher Top Raider.

It wasn’t 3 cast later with that Top Raider, that Cory, the kid in the back of the boat, landed his very first musky! It wasn’t a monster by any means but a beautiful 31 incher that flash danced its way around the back of the boat. The monster though, was soon to come.

After hitting a few more spots with no action, I decided to check out Big Pete’s Bar. As we approached it, I noticed not one single person fishing “The Bar.” Possibly due to a strong westerly wind, which made a bit rough out there for drift casting, but we were game. We were half way into our second drift when lightning struck that Stillwater! Just 3 feet from the boat and as Greg was going left into a figure 8, a monster of a fish reared its head and grabbed the last treble hook on that bait. What came next was sure pandemonium!

Greg, being somewhat at a disadvantage with the limited arm mobility, couldn’t set the hook, let alone hang onto the butt end of the rod! In a matter of a second, I reached in with my left arm and helped him drive that lonely treble hook home, all the while hanging on the upper part of the rod. That fish just went wild leaping, with one leap almost into the boat! While this behemoth was making a couple of passes around the bow of the boat, I instructed Cory to grab the net while I was helping his dad hang on to the rod. What seemed like an eternity of time, that beast was finally in the net and not a moment too soon either, as it spit the bait!

When the dust settled, we were staring at one huge fish in the net! We carefully pulled it out, took some pictures. Measured length and girth for a graphite reproduction and sent her back with a good release. She lives again to fight another day.

All 3 of us witnessed a fish of a life time.