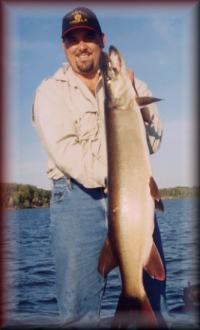 Without checking my fishing log books I am going to guess Steve and Bud have fished with me each September for eight years. As you can imagine over that amount of time some interesting things have happened during our trips. The year 2003 was by far the most unusual of these.

Let me begin by listing the partners in crime I had in the boat, Steve Bloss, former owner of Wolverine Tackle Company and Bud Borkenhagen, a bass angler by trade who dabbles in muskies as a part time hobby. In my opinion both are good anglers although Steve will get a little lippy from time to time and bring out experimental lures to try when he deems it necessary. And when I say experimental I mean he will take a perfectly good bait and wreck it for his enjoyment, like the kid who wrecks all his toys in the movie Toy Story.

I find my partners in the bar at Treelands Resort, big surprise there, and notify them I lost a hat on the way to the resort. I had put my hat below the rear casting deck for the ride to Treelands and when I got there “poof” no hat. Luckily Steve had brought me a new Wolverine Tackle hat which I sized up and away we went. Steve brought his Garmin GPS with him to mark spots for later dates and besides I think he likes to think he knows what he is doing, you see Steve and computers don’t seem to get along real well. I told him to mark a small series of humps on the West side because I wanted to see how close we could come by just using the GPS later in the trip. While Steve is showing me his vast knowledge of the GPS Bud is still hammering away with his Crane bait. You guessed it, Bud gets a hit while the rest of the boat is in a time out for technology. Bud handled the fish superbly and we netted a 31-1/2″ musky. Not a huge fish but hey, it was the right species and after the last few weeks I wasn’t going to complain.

So now it is after dark, about 9:00 and we find ourselves on Sand Island on the West side of the flowage. The blue light of the moon is somewhat illuminating our lures in the water and visibility is pretty good for being after “dark”. I am throwing a black creepinstein and after numerous casts I see what I think is my lure and another black spot about ten yards behind my lure. I do a double take and blink a few times to make sure what I am seeing is correct and ask Steve to confirm what I am seeing. My first thought is that I have a duck following my lure but something just is not right. I twitch my lure to see what happens and my lure is the far black spot and looks like it is following the other black dot, which now is about fifteen feet away from the boat and closing, and now I am feeling small pulls on my line. The unidentified black area heads behind the back of the boat and I can still feel the line pulling and I am really confused as to what is going on at this point. I turn on my headlamp to see what I first believe to be a snapping turtle, second I believe it to be a big pine snake when it finally hits me and I figure out what it is as it comes farther out of the water and turns slightly towards me as I am now starting to pull back on the line – A MUSKIE!!!!!!! Yes, a muskie, swimming with just its’ snoot out of the water until just after I turned my headlamp on it, then it came out of the water to about its’ gill plates and then went nose down, tail up and swam off into the night with me completely dumbfounded in the back of the boat. After a few seconds to clear the cobwebs I immediately turned to Steve and said tell me you saw what I just saw. He said that he had and I said I was glad because of I had been alone this would never go any further than that moment. Bud was in the front of the boat asking a lot of questions because between me, Steve and the motor most of this had been blocked. We continued to cast and finish up the spot while trying to figure out what the reasoning was for the fish to be performing these antics in front of us. The rest of the evening was uneventful, as if that was not enough, and as we headed back to Treelands in the darkness Buds’ new G. Loomis hat flew off, hit me in the head and continued on past me into the lake. As you can imagine looking for a hat after dark on the flowage is about as futile as fishing for muskies and we could not find it. So we are two hats down for the trip on the first evening.

The second day dawned and we headed out at 6 in the morning to get a long day of fishing in. The morning brought Bud one follow on a bulldog that stayed with the lure for about 3 figure 8’s but lost interest. This fish came from some stumps in about 10 feet of water. We decided to take an early dinner break so we would be ready to fish into the evening without hearing Buds’ stomach growling at us wanting to be fed so into Deerfoot Lodge we went for a burger. Upon devouring our meals my motor decided it was going to be difficult and not start until I talked nice to it. About 10 minutes of sweet talking and the motor fired up and towards Petes’ Bar we headed and about half way there off goes Steves’ hat into the water. So we are at three hats flying off for the trip and only one retrieved.

After this melee we continue for Petes’ which was easy to find because there were at least a half dozen other boats fishing the area. I picked an area with deeper weeds that was not occupied by other anglers and Steve starts whining about when I am going to let him throw a creepinstein. I told him with the wind and being later in the afternoon he could talk me into it so I dug out the orange crush creepinstein and handed it to him. He looked at me like I had just given him my first born and checked the hooks for sharpness, it’s an affliction he has, and made a derogatory comment about the weight of the beast as he sent a cast out into the slightly choppy water. We talked about the lure through the cast and could really start to hear it when about 15 feet from the boat a muskie grabbed it from the side and turned to pull it down. Steve was already setting the hook when I said a few choice words to exemplify the importance of a good hookset and it was game on. I don’t think Steve noticed this but as I was frantically reeling my bucktail in the fish almost hit the line during a jump, giving me a scare but I got lucky and the fish stayed clear. I got to the net and as the fish came from under the boat she just stopped and I scooped her up for the victory. Here is where it gets weird again. Bud says he think she is about 45 inches, Steve says about 40 and I guess about 42 while we are getting her out of the net and into the livewell. Steve and myself are amazed when Bud reads 44-1/2 inched from the stick and back into the livewell she goes to get the cameras ready. After a few photos Steve gently placed her in the water and she took off to pick another fight with an unknown angler.

Congratulations and high fives were passed around as we got the boat back in order and made another pass before heading down to the South end. We got to video tape a small black bear swimming from a floating bog to an island and had a fish boil behind a top raider three times in the same cast at dusk but could not get it to hit even after coming back later so we called it a trip and headed back to Treelands. I would like to thank Steve and Bud for a memorable time on the water and oh yea, thanks for the hat!!!