Louie Spray’s Muskie Reinstated: Four years ago on Aug. 6, 1992, Art Lawton’s world record muskie, originally thought to have been 69 pounds, 15 ounces and 64 1/2 inches long, was discovered to have been falsified (greatly exaggerated in size) and was officially disqualified jointly by both the National Freshwater Fishing Hall of Fame and the IGFA.

As a consequence of that decision, Louie Spray officially was reinstated as the all-tackle world record holder of the muskellunge with his 69-pound, 11-ounce fish that he caught out of the Chippewa Flowage in 1949.

Recapping what let to this bombshell discovery: in August 1991, some very contradictory facts about the Lawton muskie became known to me and, since so many anglers in the muskie fishing community have always questioned the legitimacy of his fish, I began to deeply research the matter. My goal was to neither prove or disprove the Lawton muskie, but to learn all of the facts about his fish with a commitment to the ascertainment of the truth.

In summary, the Lawton fish was disqualified because it was discovered that Art Lawton had submitted false evidence to Field O Stream (the record-keeping body at the time) supporting his world record muskie. It was discovered that: the photo he submitted to Field & Stream as being of his 69-pound, 15-ounce muskie actually was the photo of a much smaller muskie of 491/2 inches and 55 pounds and that the weigh-in affidavit Lawton submitted was false evidence. The principle weight witnessed had recanted his original story.

Among the preponderance of evidence discovered proving the fish to have been falsified, the key piece of the whole affair rested upon a newly discovered photo of the Lawton muskie, showing the fish hanging from a post, clearly showing the true size of the fish. The photo shows the muskie to be approximately a foot shorter than Art Lawton’s own height — and not a mere 3 1/2 inches shorter as claimed by Lawton, who was 68 inches tall.

Louis Spray holds with the largest muskie ever caught in history

Some individuals have made the petty, and unfounded accusations that the National Freshwater Fishing Hall of Fame disqualified the Lawton muskie in an effort to “bring the record back home to Wisconsin.” But to anyone knowing the facts, this easily can be dispelled. The fact is, the decision to disqualify Lawton’s fish was not made by a handful of “Hayward people,” but by a world board of approximately 40 Advisory Governors made up of people from all over the United States, Canada and even abroad. These people voted overwhelmingly to disqualify the Lawton muskie solely because the facts indisputably prove the Lawton fish to have been falsified.

So, history is once again back on its correct course and the mark to bet is set. It only takes time on the water and that one charmed cast to catapult you into the record books to attain that hallowed title that Louis Spray now holds with the largest muskie ever caught in history – his 69-pound, 11-ounce catch from the Chippewa Flowage.

Please visit the Freshwater Fishing Hall of Fame in
Hayward and check out all the catch records on the Chippewa Flowage.
www.freshwater-fishing.org 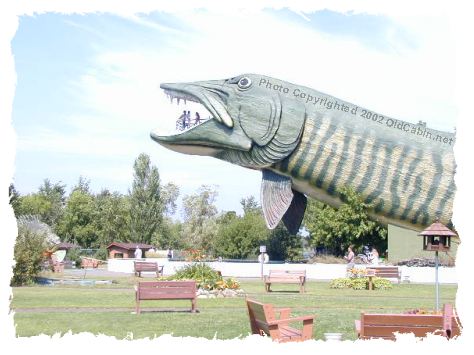