Remains of a large Musky found

Remains of a large Musky was found on the Chippewa Flowage

The remains of what is believed to be a large musky have been found on the shoreline of an island on the Chippewa Flowage, Hayward, Wisconsin. I will share with you what I know as factual and keep you apprised of this story as it unfolds over time. At present, the remains of the jaw, skull, fragments of vertebra, and flesh are being examined in the laboratories of the Wisconsin Department Natural Resources, Madison, Wisconsin as verified by Frank Pratt, WDNR Biologist (per phone call 9-5-06). An update: Frank Pratt talked with Harold Treland, Treeland Resorts, that measurements and analysis are currently being conducted on the fish carcass—Pratt indicated he will advise Harold Treland of examination results when available (9-6-06).

It has been reported that the following took place regarding the recovery of this fish carcass; folks were vacationing at Dun Rovin Resort on the Chippewa Flowage, their dog came upon fish remains while this family was walking the shoreline of an island on the Flowage. The fish remains were retrieved from their dog, packaged, and taken to Treeland Resorts (8-14-06) where it was witnessed by Ty Sennett, Tanner Wildes, and Tyler Treland, and others. A comparison was made to the jaw bone of a verified musky that is on display at Treeland Resorts and comments were made that
the newly found jaw bones were larger. 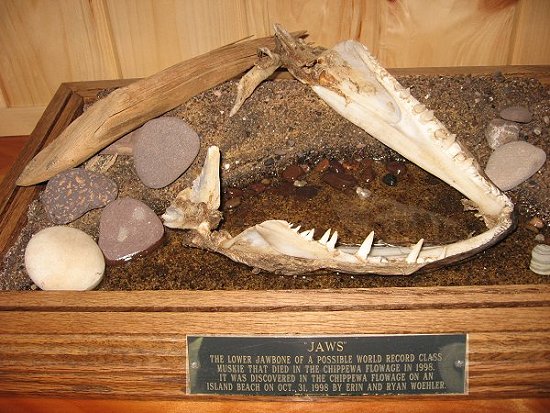 After some discussion what to do with the discovered fish carcass, it was decided that all the flesh and bone to include any information be turned over to the WDNR. If I have made errors in this narrative I will correct in future News Releases on this site. I will also keep visitors to this site up-dated on any findings that come to us regarding these fish remains. I would like to commend the folks who made this discovery possible—hopefully there will be sufficient flesh and bone material to do extensive scientific examination and give us further information on our fishery on the Chippewa Flowage. -Moon Man