Who Has Fun on the Snow? 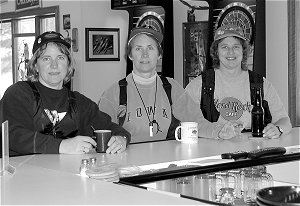 January of 2002 was not known for abundant snow, but visitors managed to have a great time snowmobiling anyway. While the snow on the trails was getting a little thin in places, the Chippewa Flowage was the place to be. The lake was smooth as ice (duh!) with a perfect cover of snow for sledding. Fourteen business, most right on the lake, took part in the 2002 Snow Tour. Visitors picked up a Snow Tour Card from participating businesses and got stamped with a unique stamp by at least 10 of the 14 businesses. Stamp designs ranged from cherries to fish, trees to dinosaurs. Once the required number of stamps was obtained the guest earned a FREE LAPEL PIN. The one inch oval pin featured a scene of snow covered birch and pine trees. The writing stated “Lake Chippewa Flowage – Hayward WI.”

Over 430 sledders participated in Snow Tour 2002. Minnesota was represented by 161 snowmobilers. There were 144 from Wisconsin, 65 from Iowa and 62 all the way from Illinois. About 10% of the people who earned pins were from the Hayward area. 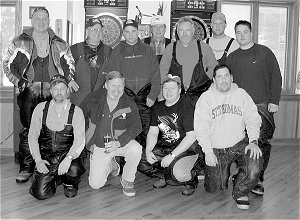 But some participants weren’t satisfied with just going business to business. They devised interesting new ways to complete the tour. One example is Gloria, Nancy and Sue. These ladies from Iowa (Individuals Out Wandering Around) relish their annual Chick Trip. In 2001 they completed the tour alphabetically. They reported the mileage to be just over 125 miles. In 2002 they chose a more random method. They cut up a card and had the manager of each establishment draw the next destination out of a hat. It seemed they were crossing the lake with every name drawn, practically.

Another group that braved the daunting-sounding conditions celebrated their 25th Annual Northwoods Snowmobile Ride. Despite reports that weren’t encouraging they came up anyway and had a great time. The lake and the fire roads were great. Many trails were still good and only some were poor. Like many others who sledded in 2002 they agreed “We were treated like GOLD”. The group includes 15-20 guys from the Minneapolis-St. Paul area. Greg and his friends usually plan a pretty detailed itinerary. The elaborate planning includes travel and dining all over northern Wisconsin, but they typically are based in Hayward. The 25th Anniversary Annual Northwoods Ride was a great success.

Wipaire Co., the world’s largest float manufacturer for sea planes, located in south St. Paul, MN sponsored a company trip to the Hayward area. This was their fourth company snowmobile trip, with 12 participants in 2002 whose jobs range from pilots, to production, truck drivers and parts department, all avid sledders. Bill from Wipaire said it was a great way to go to new places. He was the first in his group to earn a pin. 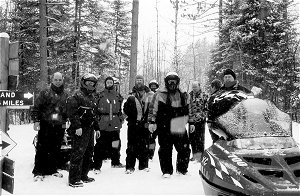 S.O.S. is a totally different kind of snowmobile group. Snowbelles on Sleds or Seldom on Sleds or use your imagination. This totally chick trip has been organizing sledding excursions for years. In fact they just celebrated their 10th Anniversary trip on the Chippewa Flowage. This ladies group originated in Crane Lake, MN, a city near International Falls. Keeping in touch when members moved away, and adding new members, the group has grown from 10 to 30 members. The 2002 trip was their first introduction to the Chippewa Flowage area. They are looking forward to coming back in 2003 and devising a new way to complete the snow tour, now that they know their way around. In the meantime they are developing a web page which will feature a cookbook of the special meals they prepare and share on the annual trip. 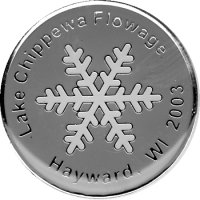 Finally, we can’t fail to mention the La Crosse, WI group of guys (B.O.M. – Boys on Machines) who not only completed the snow tour in one day, but decided to complete it twice in one day. From 7:00 pm to Midnight on a Saturday night, they were on a mission for their SECOND pin. Even though they had to skip dinner, they allowed 20 minutes to patronize each business. They elected a mayor, Jerry S. as a man who could take charge and keep them focused on the job at hand. Mayor Jerry S. said “This Snow Tour is great. The people are fantastic. All the businesses are clean and classy, great hospitality!”
We Haywardites are looking forward to great snow in the future, but now we know, you can have maximum fun on minimum snow.