Walleye Secrets of the Flowage – by John Dettloff

Anglers like Blank, Bergman, Bartlett, and Haack certainly have a knack for getting walleyes from the Chippewa Flowage. It comes with getting acquainted with the sections of the flowage that they fish and discovering which methods have worked during their combined total of some 175 years of fishing on the flowage. Each of these men realize the tremendous amount of structure and habitat that the Chippewa Flowage offers and knows that the first order of business of the day is to lock into the particular pattern of the day – to see what type of structure the walleye are using, at what depth are they holding and what are they eating. 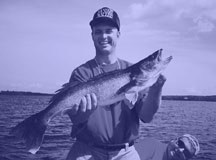 One rule of thumb is not to spend too much time in one spot. If walleyes are there, you’ll usually find out pretty quickly. Spend maybe 15 minutes in a spot and then move to either a different location within that area or onto a totally different spot. And once you key into a pattern, then try to choose similar types of structures with the same presentations. Then, if the action quits, deal yourself a fresh hand by trying something different. A word of caution that are both echoed by Bergman and Haack was to be careful not to overplay or overfish one spot. Yes, a spot can be hot and seemingly produce every time you go there but – these men have observed that one can overfish a spot to the point of ruining it for the long term. Catching too many walleye out of such a spot, can eventually make the spot “crash” and die out either temporarily or for as long as several years. So, like a farmer will rotate his crops, so will these men rotate fishing their hot spots.

They may fish a good spot on and off through out the week, but they will also lay off it during certain days and give the spot a chance to build back up. In the mean time, they’ll just fish other hot spots that have similar characteristics. That way an angler eventually builds himself up a much larger pool of hot spots from which he can choose to fish – without over pressuring just a few areas. Bergman noted that even if you snag up too often and pull up structure (brush) off the bottom, the fish may leave for a while.

The month of May is generally looked at by most walleye men as the bread and butter of the walleye season, although both the summer and the fall also can provide some great fishing as long as you adapt with the changing patterns. Most consistent walleye producers fish a variety of depths until they locate where the fish are, usually starting shallow and working deeper. Lower light conditions (morning, evening, or during cloudy weather) often provide anglers with better shallow action.

One suggestion is to look for wood (brush). Use a locator not to find the structure. Fish the “wood” at three primary depths to check where the walleye are holding: surface to eight feet, eight to 15 feet, or the deeper bog humps (sunken bogs). During the spring and fall, fish similar types of structures and, During the summer, notice two specific types of walleye: those which use deeper brush and those which never seem to leave the weeds. Especially on darker days, try to work beetle spins on the weed bars during the summer a deadly method.

During the spring and up to mid-June and then again late into the fall (when the water is colder), a jig-and-minnow combination is hard to beat. Late in May, when you begin noticing the walleye eating on the wood leeches, a jig-and-leech presentation works well. Then, in the summer, a jig and crawler is a good live-bait combo.

A jig and live bait requires a certain amount of finesse when working a structure. Jigging, one of the first skills a guide will teach you, opens the door to a whole population of walleye that one may not have been tapping into before. But for children or those who don’t have the touch for jigging, using a slip-bobber rig over some good holding structure (deep brush or a sunken bog) can be very productive.

When the walleyes are shallow and hanging along the bays and shorelines, during spring evenings, or again at dark late in the fall; Rapalas, Thundersticks, shallow crankbaits or beetle spins are all great producers. One guide was successful last season using a jig and rubber shad combination in the 7-12-foot range. Either cast just short of the weed edges from the deep and drag it down or get in shallow and cast out to 15 or 20 feet of water and hop the lure up the bank.

During the late fall on the flowage, some huge walleyes are caught out of the deeper holes on jig and minnows. Even a small sucker works both during the day time and after dark (even in November!). Don’t be afraid to cast the shallows with Rapalas or same other slower shallow-running crankbaits.

Generally, the west side of the flowage has deeper and more extensive weed growth and is known for producing a lot of weed-walleye in shallow to moderate depths; both the west and north end have a lot of deeper bog humps which are great holding areas; and the east side of the flowage, where there is only shallow weed growth and fewer bog humps, produces walleye out of either shallow weeds, deeper brush, or quick drop off edges of the bars.