The Stars Filled the Sky Over the Flowage

By day I’m a meteorologist and announcer at WCCO Radio in Minneapolis and by night I’m a stargazer and teacher. I’ve been teaching classes and hosting star parties for over 40 years throughout Minnesota and Wisconsin and I love every second of it. Don’t tell anybody in Minnesota but I can honestly say that I have best times in Wisconsin, especially Northwestern Wisconsin. The people are so friendly and welcoming around here and truly know how to have a great time. 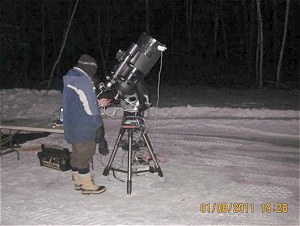 Saturday night, January 8th really cemented in my mind how much I love doing star parties in northwestern Wisconsin. I was invited by Barb and Pete at Johnson’s Resort to put on a Chippewa Flowage Star Party. My wife Kathy and I journeyed up from the Twin Cities. At first it looked like clouds were going to spoil our Saturday night under the stars but I used all my meteorological skills and called for clear skies that night. Fortunately I was right! Every dog gets a bone once and while.

This time of year though when you get a clear night for stargazing you pay for it with super cold temperatures. In our case that Saturday night we’re talking 10 to 15 degrees below zero. No problem though because all the folks that showed up at Johnson’s that night were prepared with the right clothes and more importantly the right attitudes.

We started the night outside with a look at the crescent moon and the planet Jupiter through “Big Daddy”, my large 20 inched reflector telescope. The craters and mountain tops of the moon leaped out at us through the eyepiece. When we turned Big Daddy on Jupiter we could easily see clouds bands of ammonia and methane on the 88,000 mile diameter planet. We also saw all four of its brightest moons lined up in a parade on the right side of the great planet. We also had an extra treat as we got to see one of its moon slip behind the great planet.

By then it was time to warm up inside at the cabin. We used the time inside to talk a little bit about stars, galaxies, and such. We also reviewed the constellations we were going to looked for in the cold starry dome. I showed everyone how to use a star map so they could find these constellations as well as others through the course of the year. Everyone got a package of constellation charts and star maps to take home. 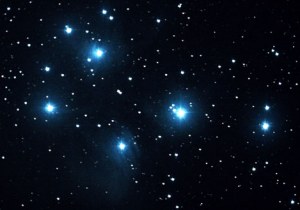 Then we donned all our winter gear and headed out to see constellations like Ursa Major the Big Bear, Ursa Minor the Little Bear, Cassiopeia the Queen, Cepheus the King, Andromeda the Wing Horse towing Princess Andromeda to safety, the great constellation Orion the Hunter and his surrounding gang of constellations. We used Big Daddy to get up close and personal with the spectacular Perseus Double Cluster, over 7000 light years away, with one light year equaling nearly six trillion miles! We also took a telescopic gander at the wonderful Orion Nebula, a huge cloud of glowing hydrogen gas. Stars form out a nebula through gravitational collapse and we could see four very young stars born out of the Orion Nebula arranged in the shape of a trapezoid,

After thawing out inside for a time, we used Big Daddy to check out the Andromeda Galaxy, the next door neighbor to our home Milky Way Galaxy, two and half million light years away. We also took a looked at Bode’s Galaxy and the Cigar Galaxy, over 11 million light years away. The rest of the evening we slewed Big Daddy all over skies seeking many other celestial treasures.

It really was a very special night for me. The slogan I use to invite people to my star parties these past 40 years is “Come out and Make the Stars Your Old Friends”. On that magical and super cold Saturday night I sure made new friends, the stars that make up the wonderful community around the Chippewa Flowage. You guys are the best!!!