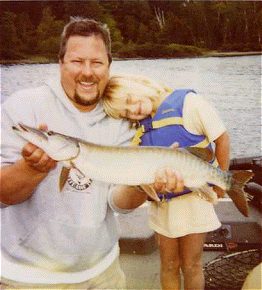 Melanie M. got hooked on fishing in a big way this summer. While Melanie has caught her share of panfish and seen her brother land a few smaller northern pike her quest to catch a musky had not happened. She would exclaim, “I am going to catch a musky this summer”, while casting off the docks at the Lake Chippewa Campground, much to the chagrin of her siblings and other anglers.

It was Sunday August 29th and before we headed back home for the weekend the family decided to launch the boat and head out onto the flowage for some fishing one last time before summer ended. The excitement happened in a calm weedy bay with my 6 year old, 49 inch tall step-daughter Melanie. She was fishing with a junior sized hawg wobbler using a Zebco 33 rod/reel combo. While reeling in the lure and singing to it a 30 inch muskie decided it was to good to let go by and absolutely smashed the lure about 10 feet from the bow of the boat.

The ensuing battle was chaos to say the least, and after managing to hang on and reel a few turns gave the reel to mom for the netting process. After the fish was in the net and everyone’s’ composure was returned Melanie turned to her brother and said, “I told you I was gonna catch a musky this before you”. Compassion for her brother is sometimes lost in the heat of battle. We took a couple photos of her and her fish and released it back into the water. The bay is located on the West side of county highway CC just past Sisko’s Pine Point Resort as you head for Herman’s Landing and has been now named Melanie Bay.

We registered the fish at Herman’s Landing where she was congratulated on her catch by all who were in the bar and we headed back to the campground to pack up for our trip home. Ah, another good memory from the flowage.