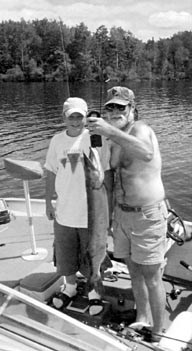 After fishing several hours on the northeast section of the Chippewa Flowage Neil Weigen, age 11, of Sun Prairie, Wisconsin caught his first two muskies on Monday, July 3, 2000, within 30 minutes. the first fish, caught around 2 p.m., was 36-1/2″ and the second was 34″. Both fish were caught in clear, warm weather around 2 p.m. Both fish were caught in close proximity to each other and both were released. Earlier in the day a 40″ musky was seen.

Neil was fishing with his older brother Eric, age 14 and his uncle Jeff. Neil was using his favorite northern rig, while Eric and Jeff were using musky baits. Neil also lost a 40″ musky the next day. Neil commented after catching his first musky that his knees were shaking. Both Neil and Eric were very excited about boating the muskies. Both boys have been taught to respect the lake, as the flowage is no playground.