Fishing with my son! – by John Zychowicz 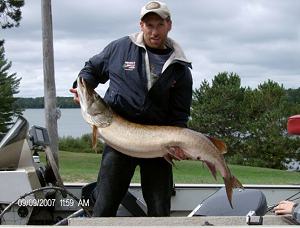 Here are some pics of a musky I caught on the big Chippewa flowage 9/9/07 she was 51 inches 33 lbs,,,,,,,it was a long week for me. I work for the heckles marina so I don’t have a lot of time off so I took the week off to musky fish,the week started out bad,on Tuesday I was fishing a lake in Shawano county with my 11 year old son,we where on the water for 3 hours seen no fish at all not even a bass .we decided to move to another spot on the lake that we know a area where a few nice fish are ,on the third cast on this spot all the sudden the water flew,bang we had one on, I told Austin to get the net ready it’s a nice fish I was fighting it for about eleven minute we got it next to the boat, Austin tried landing it, it was in the net the tally wacker got caught in the net but the fish was not all the way in the net all the sudden it got crazy and she swam off ,we estimated her between 45 to 47 inches long,we where both pretty upset,but that’s why its called fishing!

We had this fishing trip coming up on the end of the week ,things where not looking good yet,,,once we got to the big chip on Thursday we stayed at sisko resort,the family setup camp and after I set out to go musky hunting.it was starting to be long days stay with bucktails till saturday afternoon ,from Thursday evening to saturday afternoon only seen one fish,it was not looking good at all,so at 3 in the afternoon went back to the resort had some lunch and relaxed,it was getting dark and a front was moving thru it was 6:30 I decided to go to top water I was in the cedar tops it was 8:00 at night and just like that I got a real nice raise from a respectable fish,just like that my blood was pump all over again,at 8;30 i went back to camp,and told the wife I seen a nice fish.she said get up in the morning and go get him. Sunday morning came around we got a late start we didn’t get out on the water till 9:00 in the morning my dad said everything will be fine.

Sunday morning was cold 55 degrees northwest wind blowing ,my dad said either it will shut them down or turn them on ,so right away we went back where I had the raise the night before ,we spent 30 minutes there and nothing,so we pulled lines out of the water and moved to another part of the flowage that the mean depth is 8 feet and very weedy,we started on the north end of the lake and drift with the wind also casting the weed lines ,breaks and island edges,we where 100 yards into the drift I was still using top water, we where at a island point were the wind was pushing in ,had another raise it hit the bait and i could not stay with it, it was coming right towards the boat,could not set the hook then again the big goose egg.,by this time I knew top water was the answer ,dad had caught two bass off the same point,by this time it was about 10:15 in the morning he had gone two hundred yards we decided to go shallow because we seen small pike feeding,dad said its your call so I steered in shallow less than four feet deep we had gone 200 yards and one bass,we went between two islands still shallow water there where two distinctive weed beds ahead of us ,my dad and I started to cast towards them,on my dads fourth cast he hooked something as soon as his bait hit the water the water flew,we seen the back part of the fish ,I yelled it’s a hybrid ,and a nice one too,I seen the fish once more it was in the the mid forty range,the fish ended up ,going in the weeds and he could not pull it out ,just like that it was gone. By this.time we just could not believe it two fish in three hundred yard,and also it was 0/3.at this time we had to decide in staying shallow or go deep we stayed shallow.we had drifted another hundred yards no fish we went over a real shallow spot less then a foot we went around the island into a bay of three to for feet,I took a long cast with my top raider and half way back to the boat I seen a wake and the water flew my rod went down .this time I hooked one it circled on top of the water my dad seen it hit and the few seconds it was on top ,he says it a easy 4 footer,it had no were to go it was in three feet of water the hole time I was shaking real bad I said dad this is worse than deer hunting.he said just fight it out its not going any where you got him just take your time ,we had a little problem getting her into the net ,mainly because I was afraid that she would try everything to get out and she did but we got her in the boat after I thru my rod down and helped my dad get her over the side..