Just getting a chance to look at some of the walleye spines we took this last spring. A big objective of the 2014 survey was to look for the first signs of that 2011 year class that was a combination of Big Chip Fish Fest and LCO efforts to stock a total of 28,359 EG walleye and a small natural year class. This year was the first year I expected to start seeing them in our nets. This is what we saw for sizes 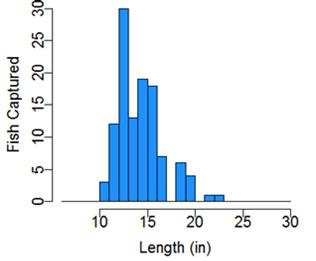 Now, when I started looking at the ages of these fish I found out that ALMOST ALL of the young male walleye between 11 and 15 inches were 3 years old this spring. Which means that they came from that 2011 class. In the attached photo you can see an example of the spines we use to age the fish (this is a spine cut from the back of a walleye, we sand the wide end and bounce light though it to make the lines show up). This spine tells the whole life story of one of your fish. In the middle you will see two distinct rings very close to one another that are kind of butterfly shaped. The inside ring is likely from the stress of stocking. The fish didn’t eat for a little bit when it was being taken out of the ponds, transported, and getting accustomed to its new lake. The next ring is its first winter in the lake during 2011-2012 when growth stops again. The space between that ring and the next one is the summer of 2012 when it grew around 4 inches. Then another line, the winter of 2012-2013. We get nice distinct lines in deep winters like that one! Then more growth in the summer of 2013. There will be a line where the edge of the spine is now, that will be winter 2014. Here’s the best part, this fish is already 14.1 inches long in just 3 years! Not all of them are growing that fast, but the average growth is still really nice. I expect we’ll start to see the females from that year class come in for their first spawn in 2015, they usually take a year more to mature. 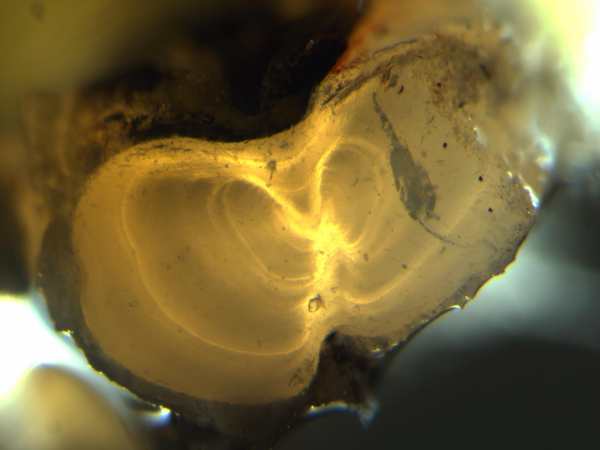