Over the winter of 2013-2014 the Chippewa Flowage Partner Group (made up of the WDNR, Property Owners Association, Resort Owners Association, the LCO Tribe, Xcel Energy, the Forest Service, and the Conservation Congress) made the decision to execute an 8 foot overwinter drawdown. As the WDNR fisheries biologist for the Chippewa Flowage I supported that decision and stand by it in the belief that there will be long term benefits to the fishery.

Fish kills have been recently reported in two small areas of the Chippewa Flowage as the ice has melted. Those areas are Crane Lake and Blueberry Flats. Based on many years of winter oxygen monitoring we know that these are consistently problem areas, regardless of the water level. So these two fish kills were no great surprise to members of the Chippewa Flowage Partner Group since this winter was one of the most severe in recorded history. Considering that many other lakes in the upper Midwest experienced fish kills this year, it is very difficult to point to the drawdown that happened this winter on the Chippewa Flowage as the cause of the small kills we observed.

Fish kills are an ugly sight for anyone who witnesses them. But it is important to keep things in context and to approach these events rationally. First, kills were only observed in an area that comprises less than 3% of the surface area of the Chippewa Flowage. There have been essentially no reports from other areas of the lake. Second, the estimated number of dead fish is a tiny fraction in comparison to the total number of fish in the lake. Keep in mind that the estimated number of panfish caught in the Chippewa Flowage is over 1 million each year. A huge majority of the fish kill was comprised of panfish and very few walleye and no muskellunge have been observed and reported.

Speaking of walleye, the Hayward Fish Team was out last weekend sampling walleye on the Chippewa Flowage using fyke nets. I was extremely pleased to see a lot of young walleye coming up in the system. Our catch was dominated by very healthy looking 11-16 inch walleye. Based on their size, many of these are likely the fish stocked in the first few years of the Big Chip Fish Fest. I am really happy with the catch rates and sizes we were seeing (big walleye showed up too, but the little guys stole the show). Even more good news is that the biggest stocked year classes are still to come with the 57,000 walleye stocked in 2013 still being too young to show up in our nets. Spawning conditions for walleye are almost perfect on the Chippewa Flowage right now, thanks in large part to the drawdown and refill, which will improve our odds of producing a natural year class in 2014 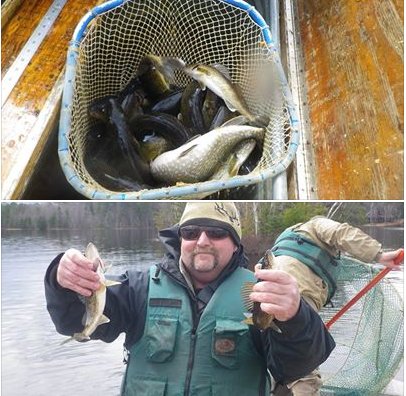