In around 1939 Jacob Kuykendall, Jr.’s grandfather Fred Kirk “caught” a musky that weighed 72 pounds out of the Chippewa Flowage, in the Blueberry lake area. As the prize was taken by spear, he did not record it as a catch but he did weigh it on an ice scale and recorded it with a Brownie camera.

Charles Kuykendall and Jacob Kuykendall, Jr. were six and five respectively at the time, and we posed next to the giant fish on the Fred Kirk farm in the Blueberry Lake area. -Jacob L. Kuykendall

Shown on the left of the musky is Charles Kuykendall, age 6, and on the right is Jacob Kuykendall Jr., age 5, sons of Jacob Kirk (Kuykendall). The date of the picture was 1939. The musky was taken by Fred Kirk (Kuykendall) husband of Madeline Kirk (Kuykendall) DeMarr, a member of the Lac Court Oreilles tribe. Her mother was Zhen-o-Wa, a full native American. The fish poles shown are for effect, but they can be used to gauge the size of the fish. The print was a black and white, with the age lines left in-tack. The black object over Jacob’s head appears to be a bear pelt, who went to his happy hunting ground along with the monster musky. 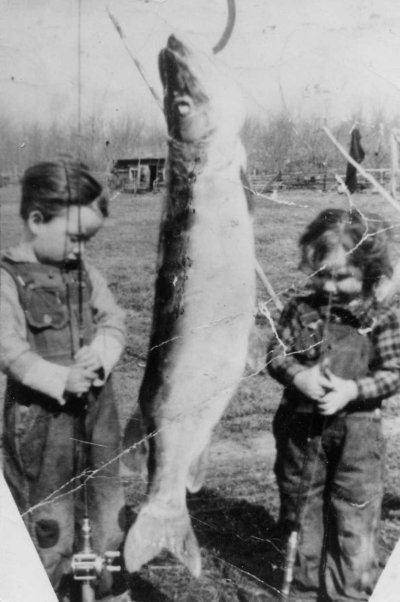