Lake Chippewa Flowage, Wisconsin’s third-largest lake, is preserved in her pristine wilderness state for you and all future generations to enjoy. In 1924, the Wisconsin/Minnesota Power and Light Company completed the dam across the Chippewa River, backing up the waters of 11 natural lakes, nine natural rivers and countless streams and ponds to form the Lake Chippewa Flowage.

Chippewa Flowage Fishing is some of the finest in the mid-west, The Chippewa Flowage is a world-class fishery in a wilderness-like setting. It is home to the world-record muskellunge– a 69-pound, 11-ounce monster caught by Louis Spray in 1949 and upheld by the Freshwater Fishing Hall of Fame as one of the most well-documented world record fish of all time.

Walleye, black crappie, muskellunge, and bluegill are the most popular species among Flowage anglers today. DNR fishery management strategies are aimed at optimizing conditions for the reproduction, growth, and survival to preferred sizes of these species in particular.

Yellow perch and smallmouth bass add positive elements of diversity to the Flowage fishery. Perch numbers are on the rise and the smallmouth fishery has become outstanding in the darker, river-connected waters of the eastern basin. Largemouth bass and northern pike are present in ever-increasing numbers particularly in the clearer, weedier western basin.

We suggest that you consult with a local Guide listed below to ensure you have an excellent Chippewa Flowage Fishing Experience. 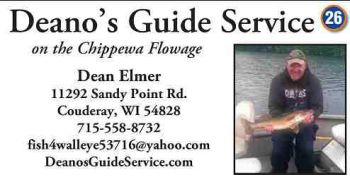 Jim Leahy is a seasoned full time fishing and hunting guide of almost 40 years. Specializing on the Chippewa Flowage as well as several other Hayward area Lakes. Jim became one of the youngest members of the Hayward Guide service at age 18 in 1977 and has lived in Hayward all of his life. He is very experienced in all methods and species of fish. Whether you&#39;re looking for a trophy Walleye, Musky bass or Northern Pike, or maybe some great Crappie and Gill fishing he will find the fish and help you catch them! Bring your GPS, his spots are your spots. Jim will clean your catch and can also provide an old fashioned shore lunch. Jim is an old school fishing guide who works at providing a safe, fish filled fun and educational day on the water. Boat Crestliner 1850 Pro-Guide, loaded with all the latest Electronics. Assortment of St Croix and Fenwick Rods 40 years of Guiding experience and a wealth of local history and information. An easy, no pressure fun approach to enjoying the day on the water whether you&#39;re a beginner or experienced angler. Trips: Half day 4 hours, Full day 8 hours (noon lunch provided by Client at the resort), Cabin or for a small fee a shore lunch of fresh fish! Prime Time rate-6 hours of fishing-early AM or later – A great choice for a serious Walleye or Musky Group. Rates are for 2 fisherman. A third fisherman or children can be added at a minimal cost. No charge for small children. Live bait and 5.5% sales tax are added to the above costs. Multiple day discounts are available Jim Leahy 715 634-0429, or 715 634-3825 .

Start your vacation off right by letting your guide, Tim Czub, show you Lake Chippewa, also known as The Big Chip. .

As an experienced guide, I’ll show you the simplest way to catch the specie of fish you are after. I will give 100% to make your trip relaxing and productive. .

I have a wealth of experience fishing the waters of Hayward and in the fishing industry in general. Working for The Walleye Federation, when I am not guiding, I travel all over the Midwest running professional walleye and bass tournaments. I am a member of the Northland Tackle and Frabill/Plano Pro Staffs and a longtime member of the National Professional Anglers Association #345 NPAA. .

The Hayward Guide Service is one of the oldest guide associations in the state of Wisconsin. There are currently eight members in the National Freshwater Fishing Hall of Fame. The Hayward area guides have been satisfying customers for over 40 years. Whether it’s musky, walleye, bass, panfish; or maybe you simply want to learn your favorite lake a little better. The Hayward Area Guides have up-to-date, clean and comfortable boats, and will provide equipment if necessary. You will need to bring rain gear, sunglasses and a camera. .

Guiding anglers in the Hayward area for 38 years. If you are looking for the ultimate outdoor experience here in the Wisconsin northland, give me a call. I offer guided fishing trips for musky, bass, walleye, and panfish. I offer both Full and half day trips but the most popular is the 5 hour evening trip which gets you on the water during prime time. Guide rates and trips are based on 2 people but I also offer fishing trips for panfish or walleye for a family or up to 4 or 5 people. .